The study (Healthcare integration) prepared in the frames of this subproject can be downloaded by clocking on the picture below (in Hungarian). Results of the subproject were summarized in the following points. Click on the text for details.

Objective of the subproject

During the Legal Accessibility project, implemented in 2016, cross-border integration of health care services was identified as a priority topic, because numerous different questions emerged in the domain of this topic at the stakeholder workshops, and whose legal background is very complex and fair-reaching. The identified legal and administrative obstacles principally gathered around two topics, namely cross-border movement of patients and cross-border emergency activity. During the planning of the project in 2017, cross-border rescue activity received bigger attention. This happened because the professional agencies, which were addressed during the first project, were committed to the initiative. On the other side, the chosen topic seemed to be more manageable as the issue of cross-border movement of patients.

Aim of the subproject was to make a detailed analysis of the legal and administrative background of cross-border emergency activity with help of a professional working group, and we articulated proposals in order to terminate the existing obstacles. Hence, we wanted to achieve

We think that the subproject was successful, since it effectively triggered a debate between the domestic competent authorities and professional bodies, as well as legislative proposals and policy recommendations were drafted in order to eliminate the existing domestic obstacles.

Manager of the subproject was Enikő Hüse-Nyerges, a project manager. Working plan was prepared on 3rd of May.

A working group with experts was set up in order to support the professional preparation of the study. The working group had 4 meetings during the duration of the project. Besides, taking into account the complex financing background of the issue, two experts were entrusted with the task to elaborate the related chapters. The relevant request was sent to the National Health Insurance Fund of Hungary on 13th of June, and we made a contract with two experts, recommended by Deputy Chief of Health, Zsolt Kiss. The two involved experts were Brigitta Paragh and Dr. László Kőrösi.

The following experts were involved within the work of the working group, except the CESCI members (Enikő Hüse-Nyerges, Dr. Norbert Jankai):

The working group had 4 meetings altogether: on 6th of July, on 13th of September, on 11th of October and on 23rd of November.

At the first meeting of the working group, critical questions of legal harmonization were identified by a narrow circle of participants (National Ambulance Service, National Health Insurance Fund of Hungary) with the help of CESCI staff. These critical issues go far beyond the health and professional fields, thus, they affect also other domains, like the issue of transport, information communications and the language competence of participants in rescue. Besides, the participants, with the representative of the National Health Insurance Fund of Hungary, thoroughly analysed the domestic and EU aspects of the funding background of health rescue activities. The participants began to identify the EU and national legislation which play relevant role in each topic, as well as they surveyed the possibilities to overcome obstacles. At the end of the meeting, they agreed on further tasks and about the scheduling.

At the second meeting, the number of participants of the working group was extended by the representative of the National Healthcare Services Center, who raised several important questions and issues in the field of cross-border rescue activity. Majority of the questions were either fully or partially answered at the meeting, but in several cases there was a need for further information gathering, legal analysis or involvement of an expert from the sector. During the second part of the meeting, the participants began to clarify the methodological questions relating to the theoretical designation of border area health care and to identify the data and information that were required by the given task.

At the beginning of the third meeting, CESCI reported on the progress of the project in the domain of clarifying professional issues and data collection. They expressed that since the previous meeting, they managed to contact with the experts of Pro-M Zrt., who assure radio services for the National Ambulance Service, as well as they contacted the company that assures ambulances and personnel staff and who answered the previously emerged questions. Subsequently, the participants with the help two experts from the Ministry of Human Capacities, National Health Office of Health Care Administration, reviewed the possibilities of extending the permits in order to carry out foreign rescue activity and they formulated their final proposal. During the second half of the meeting, the questions that were previously unanswered were clarified and the methodology for the theoretical designation of border area health care was finalised, too.

Before the fourth meeting of the working group, the comprehensive study, involving the main results of the subproject, and the draft of the bilateral agreement on cross-border emergency rescue operations were completed. Both materials were shared with the experts of the working group before the meeting. The experts sent their questions and suggestions to the prepared documents before the meeting. At the meeting, the suggestions were reviewed separately and they clarified the content of the disputed parts. On the basis of this, CESCI staff finalised the above mentioned documents.

Debated at the meetings of the working groups, legal and administrative obstacles, which hinder ambulance vehicles to cross the borders in emergency case, affect numerous areas besides health care. In order to clarify these issues, we contacted the following actors with the aim to gather information.

For the spatial modelling of border areas, which was implemented within the framework of the study, an extensive data collection was needed. In order to obtain the data, we contacted the following organizations and institutions with the help of the working group members:

Summary of the subproject results

The starting point of the subproject

The starting point was the analysis that was implemented by CESCI in 2016, whose main findings were the followings.

Contribution of the expert working group

Contribution of the working group to the final documents seemed to be very fruitful and useful, because the participating members had knowledge about the regulatory background of their own field of expertise and it significantly contributed to the exploration of the full range of existing problems and obstacles, and to the formulation of solution proposals, as well as to develop of the required methodology, to obtain the data that was needed for spatial modelling of border areas.

Besides, the preliminary concept of the CESCI was partly modified on the advice of the participating experts. According to the original idea, we wanted to take steps to enable sharing of cross-border hospital emergency services. This would mean in practice that in case of emergency rescue, the patient would not be necessarily transported to the nearest domestic hospital, but the patient would be transported to the nearest hospital, where he/she can receive appropriate health care service, even in the case when the hospital is located beyond the border. In the case of emergency care, there are no legal and funding barriers in this respect; however, equal opportunities of the injured would be violated. In order to avoid this, the experts advised that regardless of whether domestic or a health care rescue unit beyond the border provides a health care for the injured person, it should always be considered whether the patient would receive higher standard and/or faster patient care in the state of action or in a neighbouring state. However, opening of borders in this specific issue would generate capacity and financial risks because of the expected increase in emergency cases. The volume of the expected increase is not known, yet. Therefore, the problem goes far beyond the scope of this project and study; consequently, we only dealt tangentially with this specific topic.

The main findings and suggestions of the study

The expert study can be divided into three major parts:

A) We made a proposal at the European level to define the concept of cross-border rescue, mutual acceptance of operational and distinguishing signs beyond the border (similar to the Directive No. 2011/24). The applicability of the Directive would be based on the condition that the involved member states voluntarily settle the terms and conditions of cross-border cooperation.

B) We recommend to regulate the following aspects of cross-border rescue through bilateral agreement:

C) Depending on the new provisions at European and bilateral level, in some cases it is necessary to implement amendments within the related domestic legislation. The new proposed legislations will affect the content of the following domestic provisions:

It became clear during the project that modification of the legal instruments alone is not enough in order to establish the conditions for cross-border emergency rescue activity, hence formulation of policy recommendations at European and/or bilateral level is necessary for each concerned topic.

Table 1.: Recommendations for the European Union 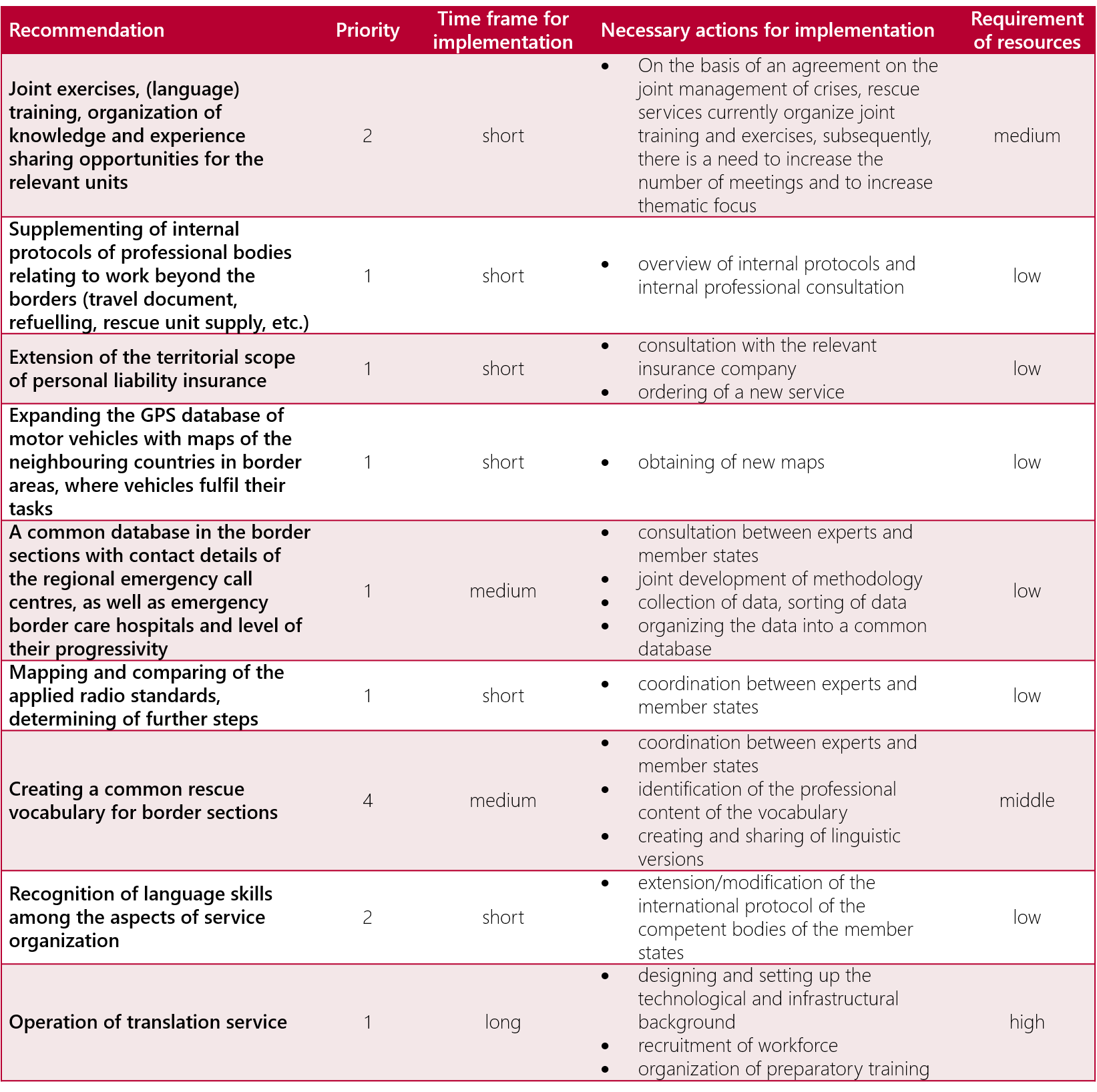 In the third part of the study, we modelled and analysed the territorial aspects and potentials of cross-border rescue and emergency hospital care at the theoretical level.

This and elimination of all the other obstacles clearly require not only the effective and high-level cross-border cooperation among wide range of professional organizations, but there is a need for co-operation and problem-solving intention at high political level between neighbouring member states; however, we currently experience shortcomings in this domain.

Based on the formulated proposals and the identified difficulties, the following continuation option is conceivable.

1) In order to organize a cross-border emergency rescue, we recommend to address and involve the competent authorities of the neighbouring countries, hence exploring the opinions of the authorities on existing policy orientations and developments in the neighbouring countries. This could allow the formulation and finalization of bilateral proposals for legislative harmonization.

2) The other segment of cross-border emergency cooperation is embodied by the emergency hospital care. Nevertheless, cross-border sharing of hospital health care services carries unknown degree of risk, which is unacceptable for the member states. In order to handle the situation, it would be necessary to make a detailed analysis of the issue and to quantify the volume and consequences of potential cross-border patient movement.