The study (Harmonization of EGTC-legislation) prepared in the frames of this subproject can be downloaded by clicking on the picture below.

Results of the subproject were summarized in the following points. Click on the text for details.

Objective of the subproject

The subproject contains the following objectives:

1. Study on exploring and analysing the Serbian legislation and its environment ratifying the Madrid Convention

The Balkan office of the Central European Service for Cross-Border Initiatives elaborated a study about Legal Accessibility. The title of the study, Legal Accessibility. Serbia’s Participation in European Grouping of Territorial Cooperation (EGTC) and Euroregional Cooperation Grouping (ECG). During the preparation of the study, experts of the CESCI Balkans made coordination with the Serbian government institutions, with the Ministry of Public Administration and Local Self-Government, and with the Ministry of European Integration.

The study analysed those possibilities that are offered by the Madrid Convention for Serbia, the territorial policy of the European Union, cross-border structures located in the Balkans, or the authors gave recommendations, solutions for applying EGTC and ECG.

Goal of the Madrid Convention is to encourage and facilitate cross-border agreements between local and regional authorities within their spheres of competences. The three protocols, supplementing the Convention, help to develop new cooperation, including also the transnational level, and to define the legal status, creation and operation of Euroregional Cooperation Groups (ECGs).

The study mentions the European Union’s regional policy, with particular reference to European territorial cooperation and cross-border cooperation programs. In a separate chapter, the study deals with cross-border structures and cooperation in the Balkans, and at the same times it maps their most important activities and projects. Unfortunately, only 7 of the 26 Euroregions in the Balkans can be considered as active on the basis of the methodology of the study (based on the activities of the last 12 months).

Figure 1.: Cross-border cooperation in the Balkans 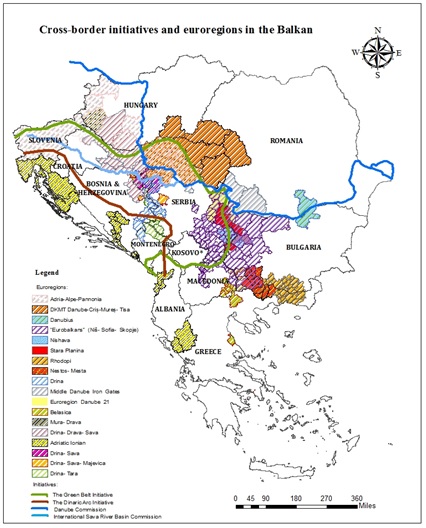 Currently, the entities of the Republic of Serbia cannot participate in EGTC and ECG as full members. Serbia ratified the Madrid Convention in the beginning of 2016; subsequently, there is no formal obstacle, on the basis of the EU regulation, that the entities of the EU Member States establish EGTC with the Serbian entities. Two possible solutions are described in the relevant chapter of this study:

Finally, the study proposes the establishment of ECGs with Serbian participation, and it specifies the details of the founding process.

2. Legislative proposal for the applicability of the EGTC Regulation in Serbia

Within the frames of the project, a proposal was developed for the EGTC legal harmonization process in Serbia. The proposal includes all the elements that may be relevant for the licensing process of the membership, or the rules regulating the conditions of participation of actors; provisions on establishment and organs, financial and economic activities, supervision and control of EGTC, or rules relating to the conditions of termination.

The legislative proposal defines the Serbian name of the European Grouping of Territorial Cooperation, its possible membership and the competent state authority, the Ministry which is responsible for registration.

The proposal was intended to get before to the Serbian Government after coordination with the competent ministries (Ministry of Public Administration and Local Self-Government, as well as Ministry of European Integration).

3. Organization of an international conference on the EGTC Regulation

The aim of the international conference was to promote cross-border cooperation in Serbia that has been preparing for the EU accession, to call the attention of the Serbian decision-makers to the potentials of institutional cooperation and to encourage these decision-makers to adopt the necessary legislation.

The first panel was about those legal instruments that were established by the Council of Europe and by the institutions of the European Union. The Madrid Convention and its offered possibilities were mentioned. Then, good examples were presented by the concerned representatives and experts within the second panel. The final panel included the possibilities of Serbia relating to the development of border regions, which can be implemented through proven legal instruments.

It was expressed at the conference that it is important to pay attention to the fact that regions, municipalities and settlements can participate in cross-border regional cooperation.

Almost 150 people participated at the conference, especially the leaders and the representatives of municipalities, the representatives of the institutions in the neighbouring countries and different organizations were present. The conference was opened by István Pásztor, President of the Assembly of the Autonomous Province of Vojvodina. The speakers of the conference were the following ones: Hajnalka Juhász, Head of the Ministerial Cabinet, Ministry of Justice, Hungary; Slobodan Vukčević, Ambassador of the Ministry of Foreign Affairs of the Republic of Serbia; Tim Cartwright, Head of the Council of Europe Office in Belgrade; Martín Guillermo Ramírez, General Secretary of the Association of European Border Regions; Slaven Klobučar, EGTC Platform Coordinator of the Committee of the Regions; Patrícia Abaffy, Deputy Head of the Ministry of Foreign Affairs and Trade of Hungary; Yolanda Puiggrós Jiménez de Anta, Legal expert of Roca Junyent; Zoltán Bara, Director of the Slovakian Pons Danubii EGTC; Ana Nikolov, Directress of the AEBR Balkans and Director of Planning, CESCI Balkans; Sanda Šimić, Ministry of European Integration of the Republic of Serbia; Gyula Ocskay, Secretary General of the Central European Service for Cross-Border Initiatives (CESCI) and Ervin Erős, Director of the CESCI Balkans.

Summary of the subproject results

The objectives of the subproject were successfully achieved.  The analytical study, exploring the Serbian legislation that ratified the Madrid Convention, was prepared, international conference was organized with 144 participants and the most relevant speakers, lecturers were present. A legislative proposal was elaborated for the adaptation of the EGTC Regulation in Serbia. The process of EGTC legal harmonization with the relevant Serbian authorities was launched.

The first cross-border association with a member entity from third country was established in the EU, namely Tisza EGTC, and the seat of this association is in Hungary. Out of the seven neighbouring countries, only Serbia is the only one, where the necessary legal background is not available in order to establish such associations. Although, Serbia ratified the Madrid Convention (as one of the last Member State of the Council of Europe) in early 2016, but drafting of the implementation rules are delayed.

Primarily, the subproject was intended to launch the development of the necessary legislative background in Serbia. Given that the legislative proposal was completed, the CESCI Balkans office will continue the coordination with the relevant ministries, namely with the Ministry of Public Administration and Local Self-Government, with the Ministry of European Integration and with the Ministry of Foreign Affairs in order to get the legislative proposal to the Serbian Government after final consultations. This process has been supported since the beginning by the Council of Europe and by the Department of Economic Development of Border Aras of the Hungarian Ministry of Foreign Affairs and Trade which is responsible for EGTCs. During 2018, the CESCI Balkans intends to put special emphasis on further steps of legislative harmonization in Serbia, as well as to promote the benefits of the EGTC. Subsequently, it launches a new initiative together with the Council of Europe in 2018, namely Leadership Academy for CBC.